Want to be more productive? Make some noise

Is a noisy workplace denting your productivity? Perhaps not as much as you think… Matt Burgess reports

Not all sound is created equal. At a first glance, the Netherlands office of Plantronics, which makes Bluetooth headsets and office technology, is similar to many other modern workspaces: open spaces encourage conversation, sofas and bar stools let informal meetings take place and natural light enters through floor-to-ceiling windows.

But, dig a little deeper and things are different. The building has been designed to minimise the amount of sound bouncing around inside it. “We are hardwired to pay attention to conversation and our mind is subconsciously working to piece conversation together, whether we know that or not,” says Robert Manassero, global product marketing manager at Plantronics. In offices, he says, the most distracting element of noise is how clearly we can hear conversations happening around us – something Manassero calls “speech intelligibility”.

As such, Plantronics designed its Hoofddorp office in a way that attempts to minimise noise distraction. The carpet, made from recycled fish nets, absorbs sound, while patterns have been subtly added to direct people away from desks where others are working; indoor water features create a calming background noise; and crystal-shaped walls deflect sound. Manassero says there’s also a system of speakers in the ceilings that detect when there’s loud speech, and compensate by increasing the natural sounds of water and background noise.

The right sort of noise

It may seem counterintuitive to cover up distracting noise with more noise, but science supports the approach. Noises playing around workers can boost productivity and the quality of work. “People’s error rate can increase between 4 per cent and 41 per cent in an environment dominated by speech compared with silence,” says Laurent Galbrun, an assistant professor of acoustics at Heriot-Watt University’s School of Energy, Geoscience, Infrastructure and Society. Reducing the amount of human-made noise around people working can help them to get things done.

“Noise tends to reduce accuracy and speed of performance, but mostly for mentally demanding tasks,” adds James Szalma, from the University of Central Florida’s Psychology department. For some low-level, simple tasks, the amount of noise doesn’t matter. Galbrun adds that short-term memory tasks tend to be positively impacted by masking noises being played into working environments.

“What the sound evokes is important, natural sounds tending to be preferred to man- made or artificial sounds,” Galbrun says. A 2015 study published by the Journal of the Acoustical Society of America found natural sounds, such as flowing water, may be more beneficial for employees than the white noise offices have relied upon for decades(1). White noise is created by combining sounds from a variety of frequencies the human ear can detect – it’s effective at blocking out sound but not the most soothing. Background sounds, whether ambient natural noises or white noise, can also stop conversations from travelling across a wider space, increasing privacy in the process. 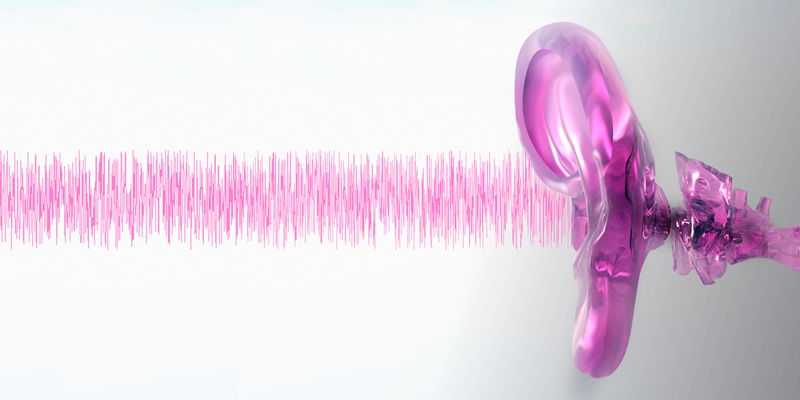 The wrong sort of noise

Being in an environment that is too noisy can have health impacts that go beyond the loss of hearing. The European Agency for Health and Safety says the frequent ringing of a telephone, someone constantly talking or the hum of an air conditioning unit can cause added stress at work(2). While one 2018 study from The National Institute for Occupational Safety and Health found 22 million US workers experienced loud noises in their jobs each year and many of those that did had high cholesterol and blood pressure(3).

But simply cutting out all noise in offices – something that is almost impossible – may not be positive for productivity. A Journal of Consumer Research study, published in 2012, found that creativity of workers was higher at a moderate noise level (70 decibels) compared to a low (50dB) level of background sounds. When it passed 85dB, productivity was seriously impacted. In the UK, noise regulations say when there’s an average level of 85dB then employers must provide hearing protection and places where there is quiet. It’s unlikely that most offices will reach an average level of 85dB – around the same volume as a diesel truck travelling at 40mph, 50 feet away from you – for an entire working day but that doesn’t mean office noise isn’t disturbing.

Office spaces can be improved to reduce sound. “The most effective office configuration is going to be one that utilises an array of different tactics,” says Manassero. He explains there are three main techniques: absorbing, blocking and covering. Each provides a different benefit. Soft materials can absorb sounds, but office designers are frequently using more glass and wood that’s better for the environment and worse for sound; blocking sounds can be achieved with more office furniture; and it is possible to cover sounds with other ambient background noise. “The use of plants in indoor spaces can positively improve the soundscape,” says Galbrun. Most of these things can’t be achieved by individual employees, it falls upon employers and office managers to make the changes.

But there is one big thing an individual can do to improve the sound around them: wear headphones. “For people working in cubicles in a noisy workplace, the best option would be to use noise-cancelling headphones to reduce the noise,” Szalma says. “This is not 100 per cent effective, but it may help some people in some office environments.” Music doesn’t have to be listened to – a number of websites, apps and companies (such as Noisli(4) and SimplyRain(5)) provide free ambient noises. These include everything from gusts of wind to bird song.

And, for employers that may worry headphones are going to distract employees from doing their work rather than allow them more space to think, there’s some good news. A 2005 University of Windsor study(6) found that software developers at Canadian companies appeared happier and had a higher quality of work when listening to music. The study concluded: “When music listening in the work environment is encouraged by project directors, and the workers are amenable to music listening, then certainly music listening has a positive effect.” Time to put the headphones on.

Incentives that will motivate your hybrid team

Keep up to date

Get news articles straight to your inbox

Manage your mail: how to reclaim your inbox

What is desk‑scaping, and could it boost my productivity?

Why it’s OK to say no to meetings

You are now signed up to our newsletter

You can unsubscribe at any time